Normally when we think of evolution, we think of biological evolution. We think about man evolving from monkeys and birds evolving from reptiles. The typical progression is given from bacteria to fish to amphibian to reptile to mammal to man. As far-reaching as that is, the grand scope of evolution is even wider. 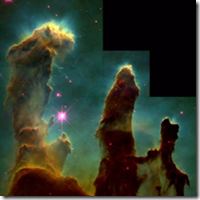 First we have stellar evolution which says everything started about 15 billion years ago with a singularity (nothing) exploding in a big-bang and producing all matter. The sub-atomic particles became hydrogen atoms which then gathered into clouds of gas due to the forces of gravity. Then by virtue of the heat of gravitational friction these increasingly dense clouds ignited on fire and coalesced into giant stars while grouping themselves into galaxies. The stars lasted for billions of years and finally burned out, collapsed in on themselves and exploded producing the heavier elements such as carbon, oxygen and iron. The particles resulting from the explosive death of stars went through similar gravitational coalescing and formed into planets, moons and eventually new stars. 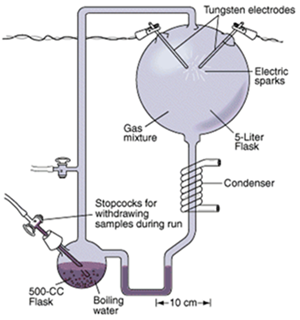 Next we have chemical evolution. Some of the planets formed during stellar evolution had sufficient amounts of water and atmospheres capable of supporting life. After millions of years of rain falling on the rocks created warm ponds of water, ammonia, methane and other chemicals. This primordial soup was struck by lighting creating amino acids. These amino acids formed chains of proteins which finally organized themselves into a self-reproducing bacterium, the first life.

So now we have something Darwin can work with, biological evolution. Life can now grow in to populations which can create offspring which may be slightly modified from their progenitors due to random mutations.

I hope you noticed the two biggest leaps in this story of evolution. The first jump was from nothing to everything. The second jump was from non-life to life. There other big jumps as well such as between the major kinds of life. It's one thing to consider evolution of a dog population into the various species. But it is a very different thing to imagine evolution between reptiles and birds or between amphibians and mammals. The most interesting things always seem to happen at the major boundaries of things. I find it easy to believe God is in these places.

I have had some interesting discussions as to whether the Big Bang and abiogenesis are related to, or can be considered part of, evolution or not. (Of course, Big Bang /abiogenesis /biological evolution are all sold in one slick package in the public schools.) I often point out that the Big Bang is essentially a supernatural explanation for the origin of the universe (in fact a Jesuit is often credited with first proposing it): something (a 'singularity') which has not been observed and cannot be proven to have ever actually existed, and which did/does not obey the laws of our physical universe acted in ways unknown to bring about the origin of matter/energy from a state of no matter/energy. If that's not supernatural, then nothing can ever be described as being supernatural! -------------- Abiogenesis presents a classic chicken/egg problem for materialists. Life , as it exists on earth, requires a 'cell' of some type containing a replicating molecule of some type. But which came first? Chemists, even evolutionary ones like Robert Shapiro, Professor Emeritus and Senior Research Scientist in the Department of Chemistry at New York University (google 'chemist simpler view life' for his article in Scientific American) are recognizing the grand improbability (he calls it a fantasy) of an xNA molecule of any kind being able to assemble itself in the open environment and survive long enough to build a 'cell' around itself. And so they propose that the 'cell' must have appeared first. But a 'cell' (even if it could self manufacture) without the ability to replicate is also a dead end.

I've heard about Stellar Evolution.. And was known to fact that all stars form from clouds of gas and dust condensing in deep space. Great Article !